From the primitive banquets celebrated in antiquity to the most sophisticated contemporary conceptualisations, passing through the modern cult as an object of design, the table has been thematised by the discipline resulting in diverse approaches.

The idea of the pavilion attempts to rescue the essence of this long journey by highlighting the value of the collective gathering in a collective space. Sitting at the table and celebrating.

It is a large table, a simple code to recognise, an elevated plane that envelops the tree in connection with the double sculpture, permanent guests.

Event
A meeting that takes place on the plane. The pavilion absorbs the celebration in its entirety, highlighting an introspective moment of its conception, a look into the interior of the event.

Exhibition
The table is a support for exhibitions. The edge relationship between the observer and the observed is intensified. A dialogue is constructed between the inside and the outside, an invitation to the person who circulates the square. The circle magnetises the elements present in the square and is capable of being used spontaneously.

The installation dominates the place and reconfigures it. It intervenes in the familiar urban landscape and transforms it. It improvises an attractive pause for the everyday inhabitant.

It confesses itself as a new platform for encounters and uses, a place of coexistence, a generator of the city and community cohesion. In dialogue with the versatility of public space, the pavilion is recognised as a condenser of different possible situations.

Scenario
The plan is situated as a containing platform. The celebration for the square takes place on it. Raising the height of the public space for the presentation of an event makes its scenographic character explicit.

Communicative support
The piano is recognised as an object of communication in itself. In addition to the spatial value provided by its materialisation per se, it integrates information that broadens its spectrum of intervention.

The pavilion is constructed as a familiar geometric figure, the circle. Its nature expresses the absence of hierarchies, through limits formed by an infinite series of points equidistant from one known as the centre. There is a continuity in the path of its infinite edge, always synonymous with movement.

The finish of the wooden panels remains intact. Their finish evokes the natural perception of the constructive element, a manifestation of the pavilion as raw material, an artifice inserted into the public space of the city. Thus, we recognise the story that is produced in the counterpoint that reveals the insertion of a natural object in the urbanised. Constructively, the pavilion is solved by means of a wooden structural system. The panels are associated to form a regular grid circumscribed in a circumference of 11.59 m in diameter. These panels are supported on a wooden grid, with 3 x 5″ section elements, which are responsible for receiving the stresses to which the surfaces of the panels are subjected and transferring them to a system of legs of the same section.

All this set is contained by a perimeter ring that serves as a fastening element for a group of keels located in its contour and that allow to measure 1.20 mts the outer edge of the table.

Support system
An orthogonal system is defined, adjusted to the measurements of the sides of the panels. Thus, the legs are placed at the corners, obtaining a homogeneous distribution of the loads that the surfaces receive.

Structural grid
Wooden elements of 3 x 5″ section form a structural grid, responsible for receiving and transferring to the supports – legs – the stresses to which the surfaces of the panels are subjected.

Perimeter ring and keels
At 1.20 m from the outer edge of the plan, a structural ring -also made of wood- serves as an element to receive the upper grid and generate the transition with the radial keels that resolve the stresses towards the outer perimeter.

Wooden panels
38 wooden panels are used in the construction of the table. Their organisation makes it possible to make great use of the area of the panels, preserving the direction of their grain and generating a homogeneous image of their surface. 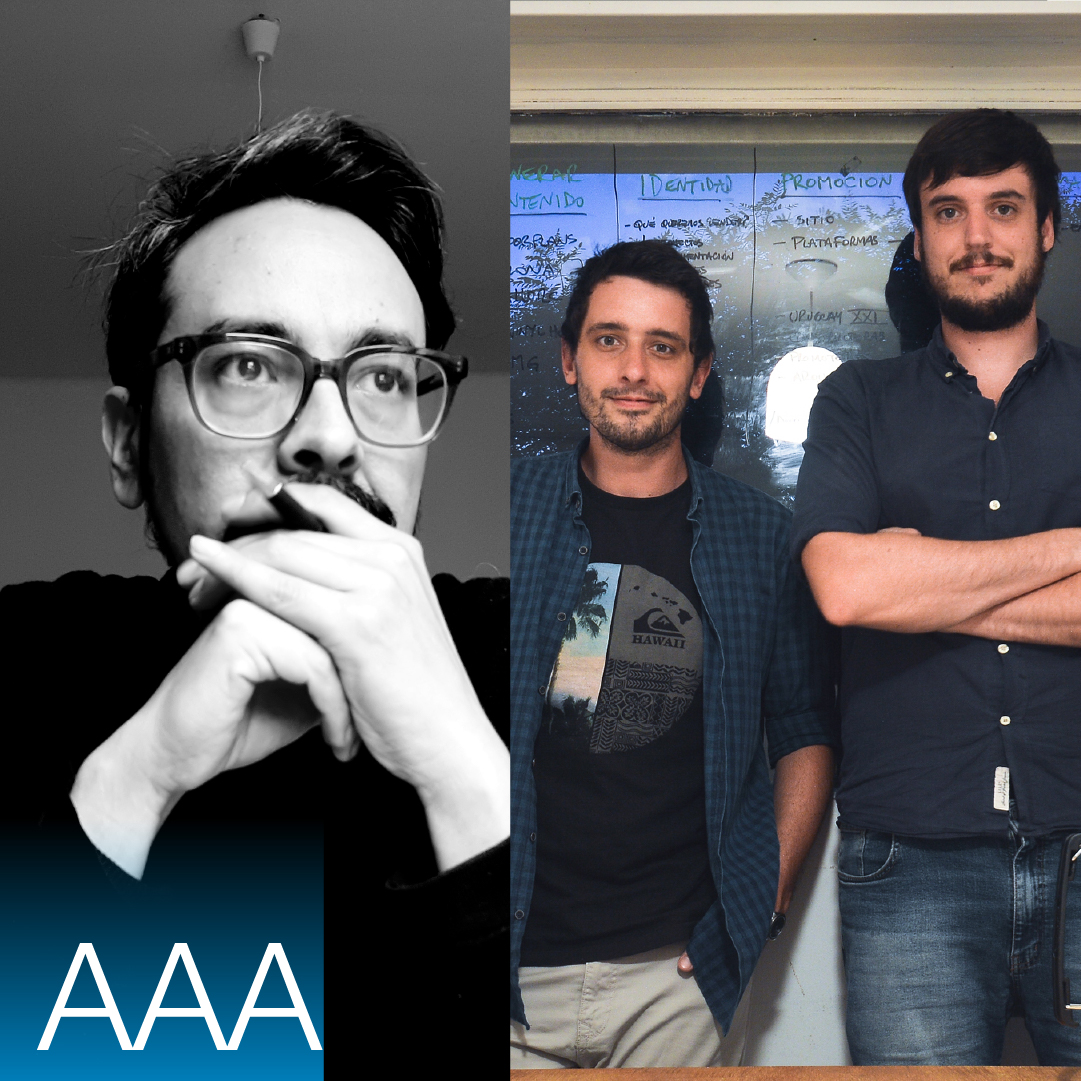 Elías Martínez Ojeda
Architect by the Faculty of Architecture, Design and Urbanism; Universidad de la República, Montevideo, Uruguay since 2012. Lecturer of Project G2 at Taller Martín, FADU. Since 2008 he has carried out multiple activities related to the teaching and learning of Architecture. Since 2015 he participates in the photographic and audiovisual production of numerous projects, exhibitions and publications for the Audiovisual Media Service, FADU. Since 2017 he shares professional and academic activities with Rodríguez-Lobo. Master’s student at the School of Architecture and Urban Studies, Universidad Torcuato Di Tella, Buenos Aires, Argentina, since 2021. Master in History and Culture of Architecture and the City.

Federico Rodriguez Fragela
Architect by the Faculty of Architecture, Design and Urbanism; University of the Republic, Montevideo, Uruguay since 2017. Dedicated to private practice, he shares his time between LGD Arquitectos and his own office Rodriguez-Lobo since 2017. He has taught undergraduate and postgraduate project courses at FADU.

Alejandro Lobo Gramática
Architect by the Faculty of Architecture, Design and Urbanism; Universidad de la República, Montevideo, Uruguay since 2019. Since 2017 he created the Rodríguez-Lobo Architecture Office, focusing his activity on the development of projects. He joined the Municipality of Montevideo as a civil servant in 2013, where he worked in the educational area at the Centre for Training and Studies until 2021, when he began to perform his duties in the Project, Execution and Control of Works Unit of the Public Spaces Department.