“Otravisión” is an intervention that aims to celebrate the plaza by providing passers-by with the opportunity to see the space from an entirely new and unpredicted point of view.

The tower-like pavilion will hosts a virtual reality experience designed and developed by NOUMENA called “Rutas”, which will act as a “virtual periscope” tool, ready to be utilized by a single visitor at a time, encouraging people to personally reflect on the space that they are experiencing. Visitors will access the pavilion by entering a small narrow corridor facing the square, looking through the slits at the space around as they move on in. As one’s personal point of view is artificially elevated by the virtual optical tool, one will begin to develop a unique and deeply personal relationship with Logroño’s collage of old and new. Anything that was above the level of direct sight or in an otherwise obstructed field of vision now will be on display.

Beyond simply providing a new point of view, the tower pavilion recalls notions of Logroño’s history as a fortified city through its form. Openings and decorations in the facade take reference from historic geometries, translating them into a sculptural pattern that modulates the light streaming in, while also letting the visitor look out into the plaza as they are inside.

The intervention ultimately centers on giving visitors a new elevated perspective of the square and sorroundings plus a new personal experience of the history of Logroño. 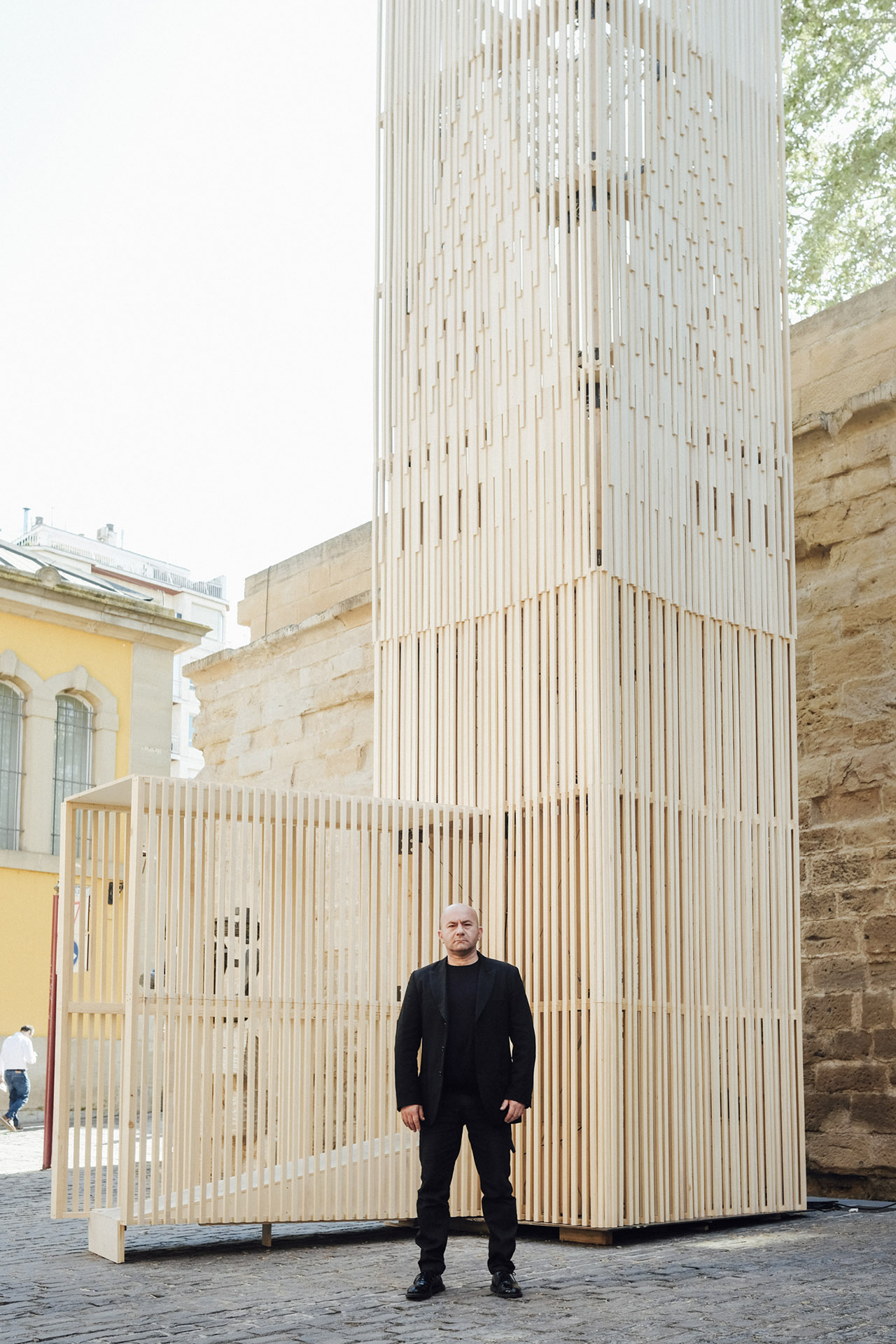 Davide Marchetti received his Master’s in Architecture from the University of Rome “La Sapienza” in 2001 and joined the Massimiliano Fuksas Office upon graduation.

The following year he became a member of the Italian Architects Registry, Chapter of Rome.

In 2004, he began his own practice, specializing in architecture, urban planning and interior design.

The office is driven by a consistent philosophical approach, not a predetermined style. It explores and develops new ways of thinking about architecture and the surrounding contextual environment in order to create models for change and innovation. Projects are approached with a comprehensive emphasis on environmental themes, materiality and cultural context. As a result, the studio aims to create specifically designed and detailed buildings that are deeply contextual with equal attention to function. High quality design results from the continuity of rigorous process and intensive dialogue with the client, consultants, contractors and inhabitants.

Noumena is a collective group focused on design, research and education based in Italy and Spain. The studio investigates between the boundaries of new digital paradigms and design strategies applied to architecture, robotics and advanced material, through a hands-on and experimental approach.

Founded in 2011 by Aldo Sollazzo and Efstathia Eleni Baseta, Noumena promotes experimentation in a multi scalar approach, pushing its own boundaries beyond conventional design limits. The company embraces data-driven design, mixing environmental strategies with computational thinking from urban scale to robotic fabrication. Being Design Associativity its strong suit, each member of Noumena leads parallel researches that favour the development of several projects involving the confluence of biology, computation, design, programmable materials and robotics into a data-informed workflow.

Noumena establishes and brings forward a networking workflow based on open- innovation through the organization and coordination of international events and activities such as workshops, competitions and exhibitions.