The access, a central door at one end, reveals at once the striking space and turns it into a single image.

Why walking along it?

The intervention expands the experience of the space: distorts and subdivides it, turns the tunnel into a path.

Upon entering, a wooden structure interrupts the view: the full depth of the space is hidden to the visitor, offering him only the continuity of the stone vault. In the center, a small hole invites to peek, as a voyeur, looking for the end of the tunnel.
However, the space on the other side does not end: it´s limit remains out of sight.

If curiosity leads him to surround the structure, he will see his image repeated. He is between two mirrors that, by having no frame, merge with the vault in a confusing world in which reflection and reality barely distinguish. 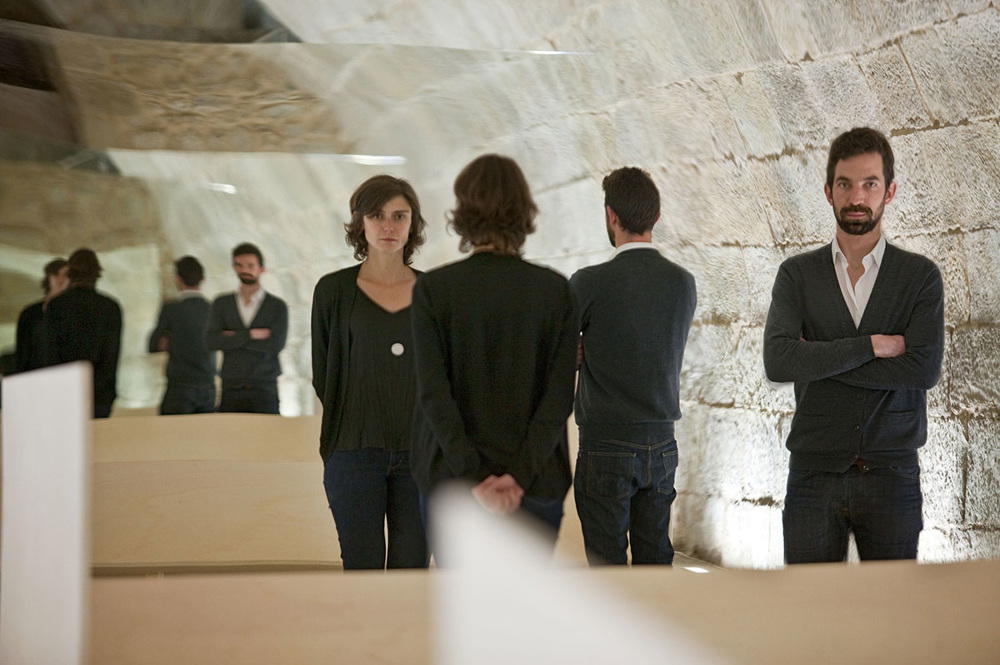 João Branco (Coimbra 1983) studied architecture at the Department of Architecture of the University of Coimbra and ETSA in Barcelona between 2001 and 2008. He studied the Máster en Proyectos Arquitectónicos Avanzados in the departamento de proyectos at the UMP ETSAM in Madrid in 2011 where he worked as a professor assistant in the chair of Juan Carlos Sancho. In 2014 he finished the Energy for Sustainability (EfS) postgraduate studies, an initiative of the University of Coimbra in partnership with MIT Portugal Program. Between 2008 and 2010 he worked in the offices of Jorge Teixeira Dias, BAAS, Jordi Badia and João Mendes Ribeiro. He began working independently in 2011.

Paula del Río Huesa (Soria, 1985) studied architecture at the Technical School of Architecture of Madrid between 2003 and 2010, where she studied the Master en Proyectos Arquitectónicos Avanzados in 2011, when she also started her teaching career as an assistant professor in the chair of Juan Carlos Sancho teaching projects of fourth and fifth course. She is currently developing his PhD thesis entitled “La identidad como concepto clave en la ciudad de finales del Siglo XX”. Her professional career has developed as a collaborator in the offices of Francisco Mangado in Pamplona and ​​Sancho-Madridejos in Madrid.