In Kreuzweg (The Way of the Cross) Gregor Schneider erected a darkened black passageway in the shape of a cross. The cross-shaped structure has four openings, one in each of its ends, through which the viewer can enter and exit. The structure’s shape of a cross is fully obtainable only from an aerial, God-like point of view. Upon entering the passageway, the viewer loses the formal contour of the structure. In addition, the complete darkness and blackness of the interior blurs the contour of the viewer’s body. It melts it into the indefinite blackness it is covered by, as well as cancelling the distinction between one’s own outer/physical and inner/psychological space; between a publicly shared and a private personal space.

Obviously enough, Kreuzweg bears a direct reference to the Crucifixion of Jesus Christ. Rather than merely formal or iconographic, the reference to the Crucifixion is experiential, staging the work as a rite of passage, a liminal phase in which human subjects walking through it are being severed from their identities and from everyday concepts of time and place to be born again and reemerge in a world of a higher order. The work organizes an event juxtaposing the deprivation of life with resurrection.

Kreuzweg is the current culmination of the redemptive theological thread that runs throughout Schneider’s oeuvre. It can be considered the explicit conclusion of many earlier works. One example of which is CUBE (2005-07). Schneider’s CUBE is a gigantic cubic outdoor structure covered in black cloth, seemingly replicating Islam’s holy edifice of the Kaaba. Kreuzweg follows CUBE in many ways. Formally, when flattened, a cube turns into a cross. In this sense, Kreuzweg is the spatialization of CUBE after it was flattened. The formal affinity between the two works allows Schneider to generate one religious notion of salvation from another, ostensibly rival, religious notion of salvation, and to harness both of them to the experience of his work. It allows him to connect CUBE’s circumambulation of black void with the immersive walked-through black void of Kreuzweg and to ascribe their symbolic value to the role played by voids in his other works.

In 2008 CUBE became END: a sixty meter long dark corridor which Schneider constructed outside Abteiberg Museum in Mönchengladbach. In order to enter the dark corridor, the viewer had to climb a small ladder and pass through a black square opening. At the end of the corridor, in which one loses one’s own orientation and bodily integrity, a shaft led the viewer to an underground dark space. The sole way out of the dark underground was the elevator which carried the viewer to the museum’s illuminated collection galleries on the second floor as if launching him or her from the domain of black death to the white territory of the afterlife.

Schneider’s interest in the afterlife is also apparent in Cryo-Tank Phoenix 1 & 2 (2006). A sealed cylindrical tank made of electro-polished stainless steel Cryo-Tank Phoenix was first presented on 02.11.06–the Christian Day of the Dead–at St Peter‘s Church, Cologne. Its initial religious backdrop created a fundamental connection between the cryonic vision of preserving dead bodies in low temperature until wishful revivification, the story of Christ’s resurrection, and the anticipated event of his Second Coming. It marked the appearance of Cryo-Tank Phoenix in affinity to the apocalyptic-eschatological circumstances of the afterlife, turning every site in which it emerges into an intermediary zone situated between life and death, between this world and the world to come.

The circumstances of the afterlife stretch back to Haus u r (House u r), Schneider’s foundational work. Haus u r is the name Schneider gave to the abandoned residential building in his hometown Mönchengladbach-Rheydt, which he occupied from 1985 until 2001, all the while ceaselessly reconstructing its inner structure as an idiosyncratic typology of visceral rooms built inside the house’s preexisting rooms (with windows in front of windows, walls in front of walls, etc.). At the 2001 Venice Biennale, after nearly two decades of implosive activity, Schneider dismantled the rooms of Haus u r and remounted them in the German Pavilion in the Giardini, under the title Totes Haus u r (Dead House u r). The title Totes Haus u r conveyed the implications of externalizing and displaying House u r as that of killing and revivifying, of lethality and redemption. Around that time, Totes Haus u r began travelling the world by ways of physical dislocation or technological reproduction (uprooted in its entirety, in single rooms and segments, or in photographs), and its body became distributed and dispersed in an extensive event of self-displacement and amputation, articulating death as a continuous scenario, and life as afterlife.

In co-production with Goethe-Institut Madrid 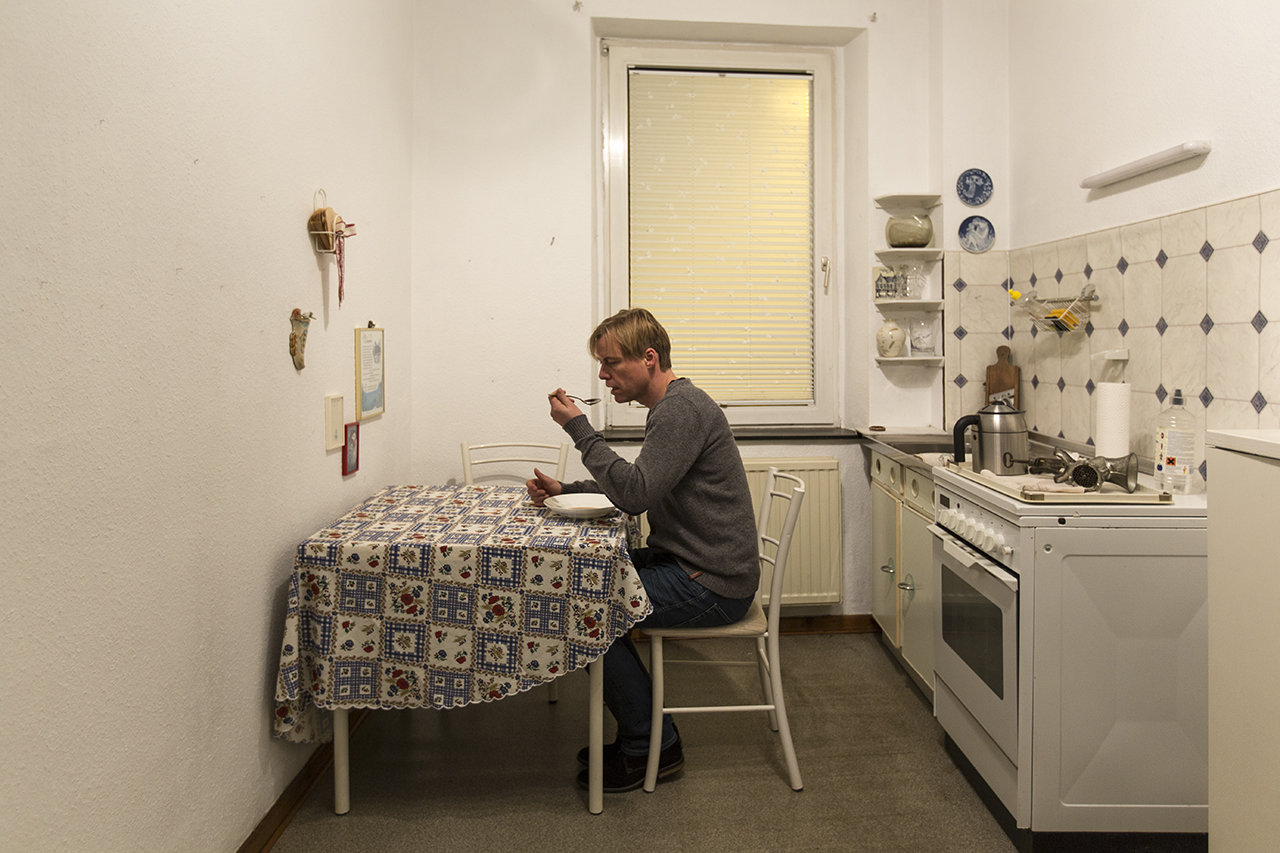 Gregor Schneider (born 1969 in Rheydt) is a German artist. His projects have proven controversial and provoked intense discussions. In 2001, he was awarded the Golden Lion at the Venice Biennale for his infamous work Totes Haus u r exhibited at the German Pavilion.

At the age of 16, Schneider had his first solo exhibition entitled, Pubertäre Verstimmung, at the gallery Kontrast in Mönchengladbach. Since the beginning of the 1990s he has worked with rooms in galleries and museums. He conceives the rooms as the-dimensional, sculptures that can be walked through, which oftentimes hide or alter the existing gallery- and museum rooms; the rooms he works with are existing rooms he finds in different dwellings or domestic buildings. In 1985 he began dismantling and rebuilding rooms in an apartment building in Rheydt, which he entitled, Haus u r.

Since 1985, Schneider has been working elaborately on the house on Unterheydener Straße in Mönchengladbach-Rheydt. The “u r” refers to Unterheydener Straße und Rheydt. Gregor Schneider created replicas of the existing rooms by building complete rooms inside of other rooms each consisting of walls, ceilings and floors. These doubled rooms are not visible as rooms within rooms to the viewers. Additionally, he slowly moves the rooms out of sight by employing machines that push ceilings or complete rooms. Hollow and interspaces are the results of the form of the installations. Some rooms become inaccessible because they are hidden behind walls and some have been isolated by concrete, plumbing, insulation or sound-absorbing materials. Via outside fixed lamps, different times of the day have been simulated. The rooms are numbered consecutively (u r 1 -) for a clear distinction. In the beginning, the originals rooms have been all areas of a house: a bedroom, a coffee room, a lumber-room, a kitchen, a corridor, a cellar. Since the middle of the 1980s visitors of the Haus u r have been reported as having had frightening experiences inside the house.